Oops, I’ve had a bit of a blogging blip, my human assistant Teresa has been ill and unable to help me put my thought bubbles into the blog. She’s up and running again now so my blog is too. And I’ve so much to tell you!

What did you think of that very cold snowy spell, ‘the Beast from the East’ I think you called it? Well that and the second freezing blast that followed was bad news for us tompot blennies and lots of other coastal marine animals. The inshore seawater temperature dropped to 7 degrees C (in normal winters it only drops to 9 degrees C) so, even though the daylight changes were telling us that it was time to breed, it was too chilly to swing into action. You can see in the photo that a female laid a few eggs with Bradley, one of the other male tompot blennies on the reef, at the end of February. Teresa thinks it was the unusually cold conditions that meant they were slow to develop and didn’t survive. We’re way behind where we were last year.

2 thoughts on “Up and blogging again! What a blast – the Beast from the East” 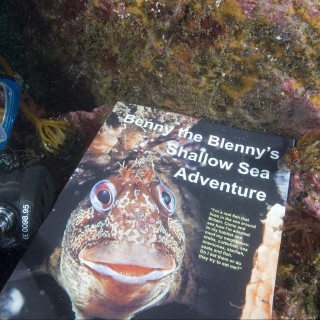 I'm a small coastal fish with a big personality! I blog from beneath the sea, using Paul Naylor's fantastic underwater videos and photographs. I've been nicknamed the 'fish with antlers' but they are really flexible head tentacles and we tompot blennies mouth fight!

Benny the Blenny the fish that blogs!

Benny the Blenny the fish that blogs!